Uh Oh, Do You Fit the Profile Of The Most Stressed Out Person in America?

If you’re a woman in your late 20s or 30s who has kids and makes less than $50,000 a year I’ve got some bad news: according to a recent study by the American Psychological Association, you fit the profile for the most stressed out person in the United States. Unfortunately, this 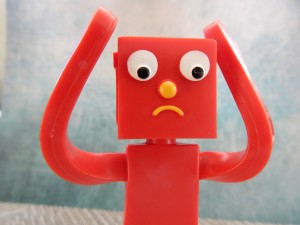 profile encompasses a HUGE section of women today. It makes sense though. Ladies in this group are trying to balance career goals with being a successful parent, while simultaneously trying to keep finances in check. It’s no wonder that stress levels are high.

We’ve all heard about some common ways to beat stress, but try using some of these unconventional tips to kick anxiety to the curb:

And if all else fails, eating chocolate and snuggling up with a furry friend are also known stress busters!

Your Eyes Will Thank You For This Computer Hack

I love to stay up late working on my computer, and while I end up getting a lot done, sometimes I have a hard time going right to

sleep once I shut down for the night. There’s been a lot of research released recently about how the bright lights from electronics can interrupt your ability to fall asleep quickly, so this makes sense.

When I heard about a program called f.lux that works to counteract these issues, I was interested to try it. The program trains your computer to adjust its brightness levels based on the time of day, making it easier for you to fall asleep. For instance, when I’m working at 11 a.m. when it’s sunny outside, my computer screen is at full brightness. However, when I decide to work late at night, the computer takes on a more reddish or yellowish glow, instead of the blue hues that can keep your brain awake. Surprisingly, the change in color doesn’t make it harder to see when you’re trying to burn the midnight oil. It’s actually easier on the eyes than staring at an ultra-bright screen when it’s pitch black outside.

I’ve only been using the program for a few days, but I’m truly impressed with it. I wanted to share with other night owls like myself!

Let’s face it: being a person is tough sometimes. It’s easy to be hard on yourself or to doubt yourself. So when I watched this video of 6-year-old Max as he tries to beat his own personal best speed as he rides his skateboard, I couldn’t help but smile. As he goes through each lap, trying to go faster every time, you can hear him giving himself a little pep talk thanks to the GoPro camera he’s wearing. I think the world would be a little better if we were all a little bit more positive and encouraging toward ourselves like this. P.S. How cute are his facial expressions?

If you watched the Super Bowl last night, you know that there were plenty of “!!!” moments, many of which actually had nothing to do with the game itself. If we’re being honest here, I tuned in more for the commercials and the halftime show than the game this year, and I wasn’t disappointed. A few of the most memorable moments from this year’s Super Bowl included:

What were some of your most memorable moments from this year’s Super Bowl? Share them with me!

This Teacher Gives Bruno Mars a Run For His Money

I can’t get enough of Bruno Mars, and I especially love his song “Uptown Funk.” It doesn’t matter how many times I’ve heard it, when it comes on, I’m dancing. Turns out I’m not the only one. In this video, Scot Pankey, a teacher at A. Maceo Smith New Tech High School in Texas, and his students put together a highly choreographed video to the song.

Even more amazing than the color-coordinated routine is the fact that Pankey says the video was shot all in one take. Check it out below