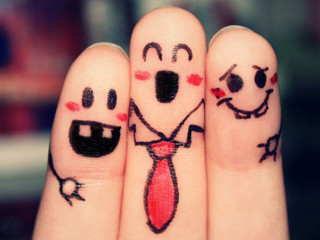 If you’ve seen Jimmy Fallon and Justin Timberlake cover years of classic rap songs in just 6 minutes, you’re probably feeling some serious friendship envy right now. And if you haven’t, stop what you’re doing and watch the video right now, because it’s amazing. Their goofy, fun friendship is the best. It’s almost enough to make you forget that they’re huge celebrities. So what other stars are giving us serious BFF envy right now?

First they were spotted riding around on a jetski together, then they were dancing on top of Billy Joel’s piano, and now there are rumors that they’re writing a screenplay together. You know that these two keep each other laughing.

They’ve been there for each other through breakups and weddings and everything in between. Courtney and Jen are the real deal kind of friends, Hollywood or not.

They started out as two guys from Boston, and now they’re accepting Oscars and dominating the Hollywood scene. But you know they’d probably rather just be hanging out at Fenway together.

Taylor Swift and her entire squad
Taylor and her crew of pals (mostly comprised of supermodels, pop stars, etc.) basically helped to create the term #squadgoals, so it’s safe to say that being granted admission into this entourage would be ideal. One night you’d gain access into Hollywood’s most exclusive party, and the next night you’d be hanging out in Taylor’s NYC apartment while she baked you cupcakes and you played with her cats. Seems pretty ideal.
These celeb BFF pairs illustrate the fact that you can be a Hollywood fixture and still value that relationship where you can tell the other person anything. And I mean anything.